11:11pm–#Bridgeport CT– First responsders are on scene of a crash with injuries on North Avenue at Lexington Avenue. There may be a second crash nearby. 3:49pm–#Bridgeport CT–Residents of 237 Park Street told me that there were sparks coming from the wall prior to their home catching fire. When firefighters arrived they found heavy fire on the right side of the multi-family home. The heat was so intense it melted the siding off the neighboring home. That home earlier this week was the scene of a home invasion where the homeowner turned tables on the suspects and shot him. The heavy smoke from this fire could be seen miles away. Firefighters had most of the fire out when I arrived, it was a ten-minute ride for me. Everyone safely made it out of the home partly in due to a child who appeared to be about 12 years of age who alerted everyone to get out of the home. The Red Cross was called to help assist and relocate 2 adults and 6 children according to radio reports. #Bridgeport CT– Students, parents, and teachers from Central High School marched to  Margaret E. Morton Government Center at 999 Broad Street, to the office of Mayor Joe Ganim is located.  They went to protest Mayor Ganim on the lack of funding to the schools and what they considered disrespect to the superintendent of the school system.  The protest was very peaceful and respectful.  The marchers felt the funding issue should have been resolved directly through the superintendent, not through the Office of Policy Management.  Bridgeport school systems are slated to run out of funds due to nonpayment from the State of Connecticut due to a lack of a budget.  Superintendent Aresta Johnson told me that the state has assured the city that the funding will be made on Monday.  She told me she is confident and not worried of the assurance the state has made.

Many of the students were seniors slated to graduate this year.  Many of them have college to attend or scholarships and a disruption of graduation time can affect those plans.  Many were saying the march/protest was spontaneous but the professionally printed signs suggest otherwise.  The mayor was attending the ribbon cutting of Autoclave in the south end of the city when the students arrived at the mayor’s office.  The crowd wanted to enter City Hall Annex were first turned away but then were allowed a handful of students to enter to make an appointment with the mayor.  The students were satisfied and walked back to school which was 2.3 miles or 47-minute walk according to Google Maps.  One of the school resource officers was recommending the students get an A for gym class this week.

This afternoon, Governor Malloy vetoed the bipartisan passed budget so the state will continue running without a budget.

4:33pm #Westport CT #cttraffic A multi-car accident happened at exit 18 southbound. As of now a car is still in the middle of the highway, causing heavy traffic

1:21pm–#Bridgeport CT–Firefighters were called to Park City Magnet School for a report of smoke in the building.  A short time later EMS was dispatched to the school for a student with difficulty in breathing.  Within minutes three ambulances and the AMR supervisor was on scene.  Firefighters told me the school’s air conditioning system was being serviced and when the system turned on it caused a dust condition.  Only one student was being treated by EMS.  At 1:40pm after all the first responders had cleared the scene another ambulance was dispatched for another student. Bridgeport Schools Running Out Of Money

Today, a letter has been circulating from the city that the board of education is running out of money.  City spokes person Rowena White said: ” Along with all other cities and towns across the state, the City of Bridgeport is anxiously awaiting for the state budget and funding.   The City of Bridgeport and its school system depend on the state support.  Both are put in a grim situation without a state budget and have to take measures to plan cautiously.     Fortunately, Superintendent Johnson has received notification from Mr. Barnes that ESC funds will be released and received by City of Bridgeport next week”.

Senator Tony Hwang said we have a bipartisan passed budget the governor said he will refuse to sign while we have cities, towns and non profits are held in limbo.

Bridgeport’s State Representative Christopher Rosario did not return phone calls if he planned on representing Bridgeport with this matter. 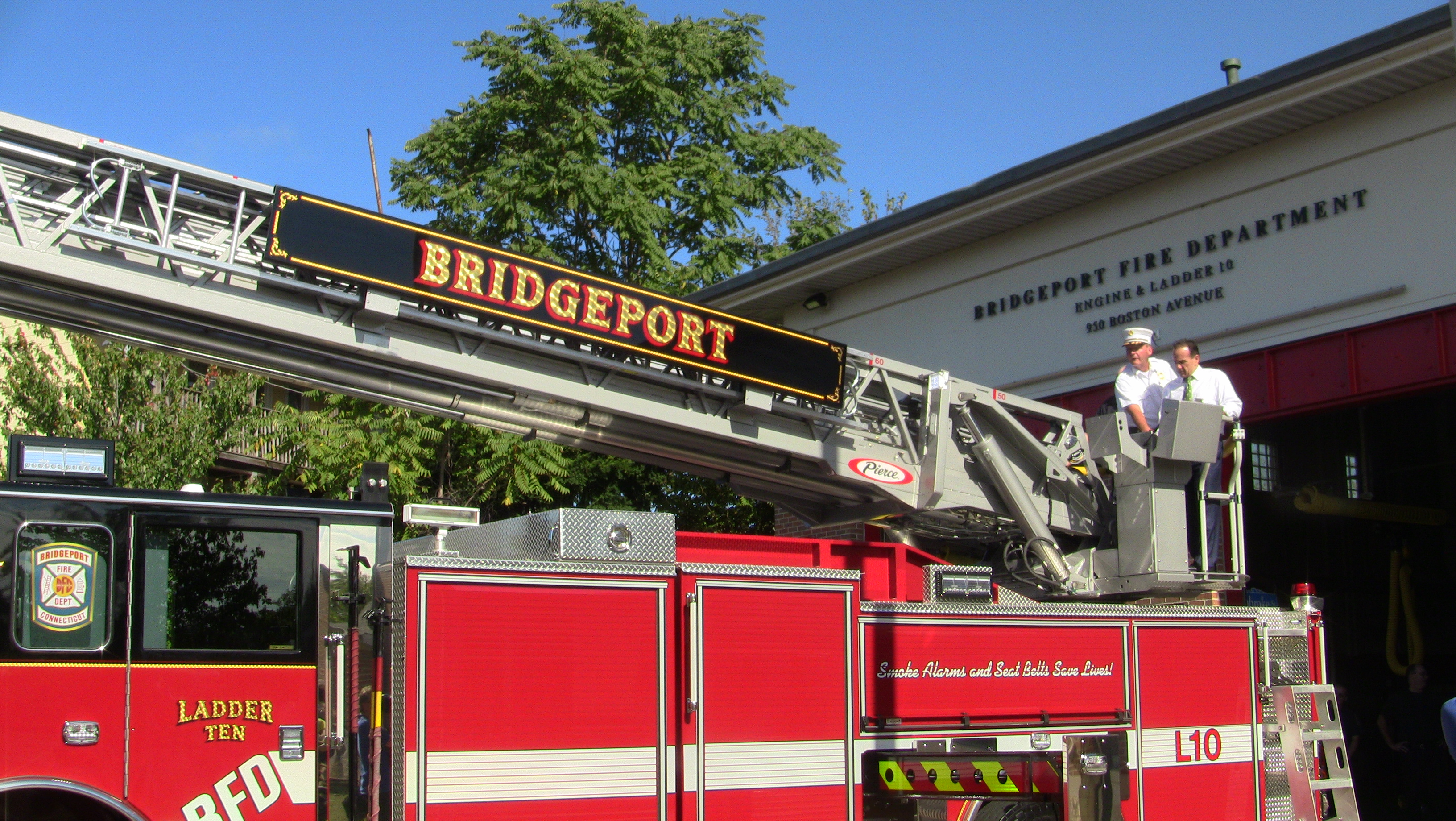 What makes this truck unique is its design. It is a 107 foot ascendant aerial. Pierce Manufacturing used state-of-the-art military designs to greatly reduce the weight of the ladder. This allows the truck to only have a single axle instead of the traditional two. Additionally, the truck has only two stabilizer jacks instead of four. This feature makes it easier to setup between parked cars on tight streets.

Fire Chief Richard Thode said, “This is a prime example of Mayor Ganim’s continued support of Public Safety and the Fire Department. The single rear axle is a game changer for us. This truck can fit in very tight spots that we encounter on the City’s congested East Side”. Besides being smaller with a greater reach, the operation is quicker.  “90 seconds from the time the truck comes to a stop to the time the aerial can be at full height,” said Thode.

The typical lifespan for a truck similar to this is one is 25 years as front line service, with an additional five years as a reserve.

11:24pm-#Bridgeport CT– A pedestrian has been hit by a car on North Avenue near Pequonnock Street.  EMS transported the victim to St. Vincent’s Hospital with unknown injuries. 8:50pm–#Bridgeport CT– A pedestrian has been hit by a vehicle at Noble and Stillman Street. First responders on the way. 3:03pm–#Stratford CT– Stratford Police have been advising citizens to avoid Woodend Road area due to a hazardous material situation there.