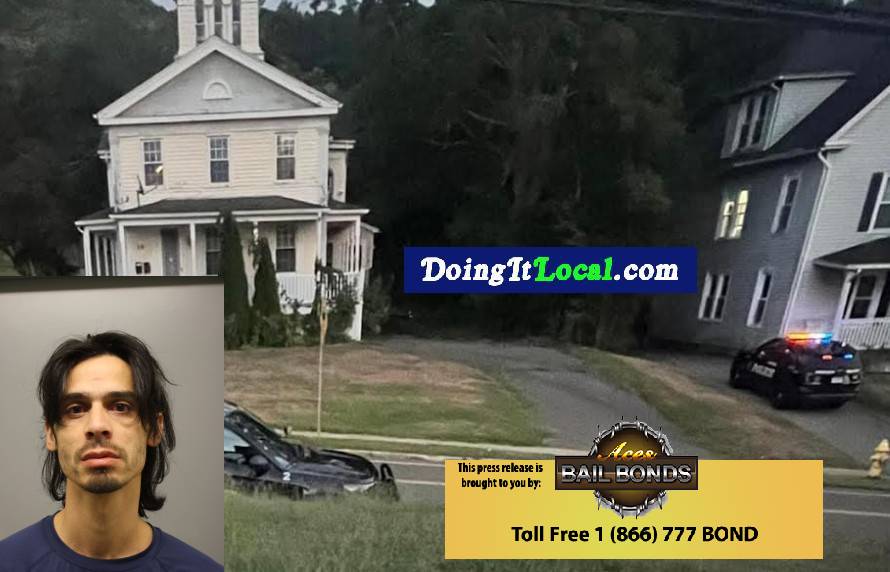 #Ansonia CT–On August 28, 2022 at about 7:30 P.M., the Ansonia Police Department received a complaint of a disturbance in a third-floor apartment on Elm Street. The first officer on scene met with the complainant, who was holding her nine-month-old daughter, outside of the apartment. She was visibly upset, and the male suspect was yelling from inside the apartment. Once the officer determined the suspect was the only person in the apartment, he took the complainant and infant to a safe area away from the house while other officers secured the perimeter. The complainant reported the male was Gabriel Resto, age 34, of Ansonia, her boyfriend and father of the infant. She told the officer that Resto was yelling at her, playing loud music and acting erratically. She also reported Resto had a handgun and was displaying the weapon. The Connecticut State Police was contacted to assist in talking Resto out of the apartment. The Connecticut State Police Emergency Service Unit responded to the scene and immediately began attempts to contact Resto in order to convince him to come out of the apartment and surrender peacefully. After more than ten hours of attempted contact and negotiation, Resto refused to exit the home so non-lethal irritants were used to persuade him to exit. Resto initially came out and walked down to the first floor but then turned and tried to go back into the house. At this point CSP ESU used a less lethal impact munition to subdue Resto and take him into custody.

Gabriel Resto was charged with Assault Third Degree and Disorderly Conduct for the domestic violence incidents involving the complainant. Resto was additionally charged with Interfering with Police for his refusal to exit the house and attempt to re-enter the house after he was told he was under arrest. Gabriel Resto was held on bonds totaling $30,000.00 and his arraignment is pending.