If you try to research newspaper articles on the pandemic of 1918 you would have difficulty as the news articles were mostly about World War I.  I found an article from the Bridgeport Telegram dated October 31, 1968 on the 50th anniversary of the flu.  The Center for Disease Control (CDC) is uncertain where the H1N1 flu strain originated.  Some say Central Asia or like in this article cites Fort Riley, Kansas with its first case on March 15, 1918, where the flu spread throughout Europe by soldiers and sailors.  Again, the world’s interest was World War I and the media at the time didn’t want to spread additional fears of the flu among soldiers and sailors so the reporting from Europe relied on independent country reports.  Spain was the country that frequently reported their sick and the flu was dubbed the Spanish Flu.  It is estimated that about 500 million people or one-third of the world’s population became infected with this virus.  This flu was second only to the Black Plague of the middle ages.

The article said Bridgeport was lightly hit by the virus.  October 31, 1918 had peak deaths of 24.  The day before that was 21 and 18 before that.  During the worst part of the flu schools, churches, theaters, and other gathering places.  The article mentions of heavy death tolls in India with the Ganges River flowing thick with bodies of the dead.  Also affected were monkeys and baboons in Sierra Lorne that were susceptible to lung infections.

Leading the fight in Bridgeport was Doctor Walter H. Brown, the city’s health inspector.  A special hospital was set up for flu victims at the “Hillside home”.  Bridgeport and St. Vincent’s Hospital did not allow visitors to see any of their patients.  By the end of September, with almost 200 cases reported, Dr. Brown asked the police for strict enforcement of laws forbidding spitting in public places.  Health inspectors also visited theaters to remove patrons who appeared to come down with the virus.  By October the theaters were disinfecting the theater at least once a day.  On October 21 the superintendent reported that over 6,000 students were reported to be absent from school.

Other cities like the nation’s capital required citizens to wear protective gauze masks before being allowed on the trolley.  Other places required armbands for those indicating the wearer was checked by a doctor and found not to be sick with the flu.  In late October, in nearby Fairfield St. Thomas Church was closed and open-air masses were given on Sundays.   All schools, theaters, churches, and other public places were closed in Stamford and Waterbury.

A cold snap in late October and early November saw the highest daily deaths but also the lowest number of new cases.  Dr. Brown said “Good cold weather is just what is needed to straighten out conditions”.  Dr. Brown had thought the worst was behind the city.  By November 7th the number of new cases was down to 48 and declared the epidemic broken.

On November 10, Bridgeport celebrated the abdication of the German Kaiser and held the city’s largest parade in history.  The Spanish Flu was last reported on November 16 when Doc Brown reported just 19 new cases and 8 deaths over the 24 hour period.   Fifteen years would pass before medical researchers were able to isolate the stain and develop a vaccine.

I’m happy to report the volume of calls EMS has been called to for our current pandemic has dropped off sharply from last week’s numbers. 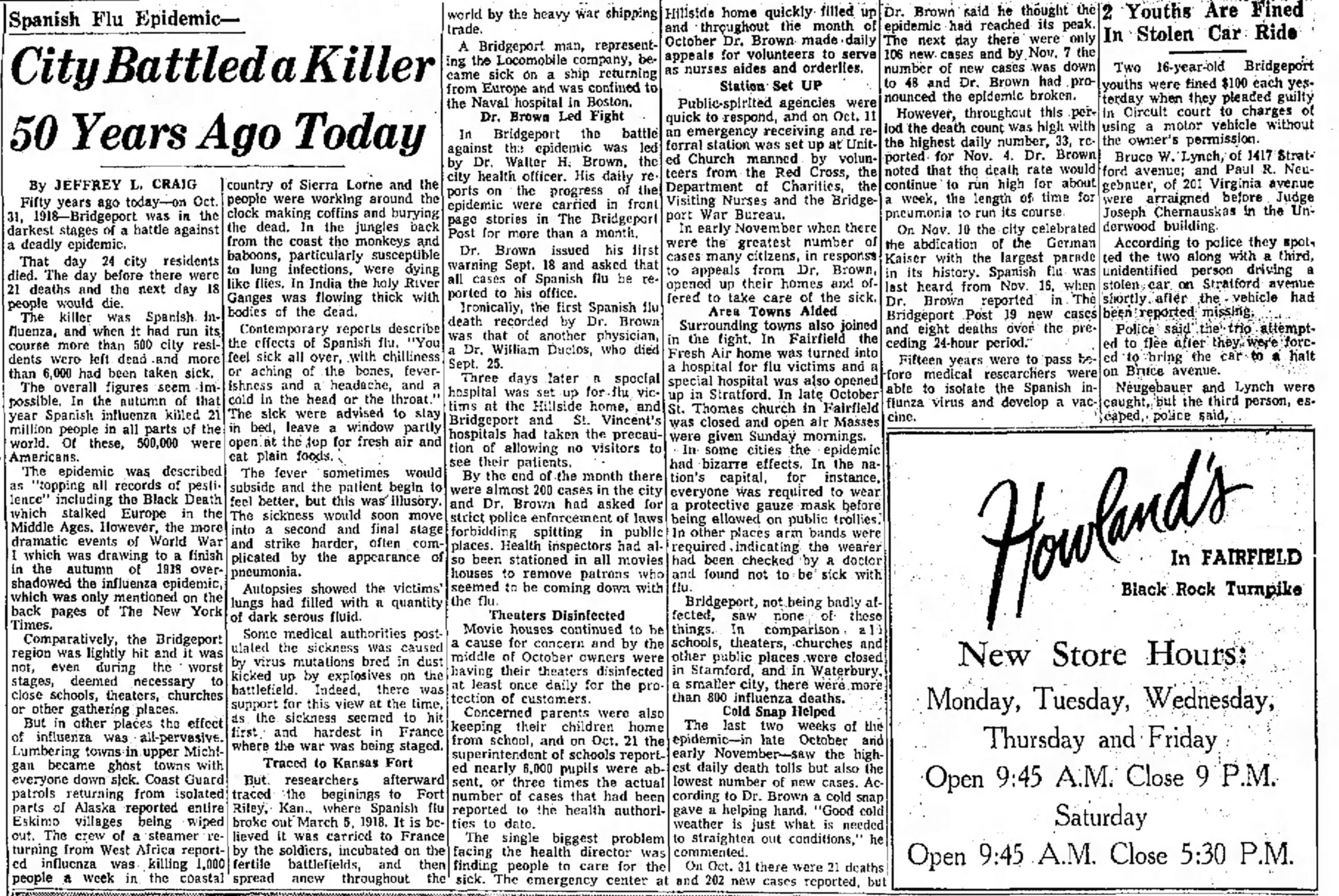