Fight on the Train

11:25pm–#Fairfield CT–#Southport CT– Police on the way to the southbound train for a fight on board one of the trains! 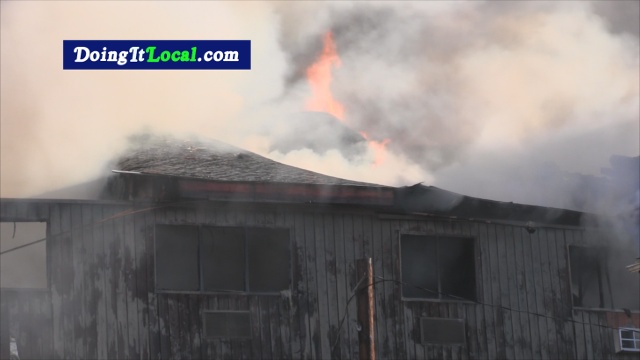 Over 100 people are without a home after a 36 unit apartment complex was destroyed by fire early this morning at 215 Charles Street.

The fire started as a car fire in the parking garage under the complex. The fire quickly spread to the apartments toward the back of the building. Firefighters used a ladder truck to rescue people on the third floor.

Everyone was able to evacuate the building. This woman was unable to locate her cat and is fearing the worst. One resident was treated for smoke inhalation and one firefighter received minor injuries.

Mayor Ganim and the Red Cross were on scene to help relocate the residents. A temporary shelter has been set up at the Geraldine Johnson School on Lexington Avenue and the city is working for a more permanent residence.

6:25pm–#Bridgeport CT– The Game Stop at 4344 Main Street was just robbed at gunpoint. Police are looking for a black male wearing a face mask dressed in all black. Police are investigating. 5:14pm–UPDATE: Stratford has him custody after a brief pursuit at Summer and Spring Street in Stratford!
4:50pm–#cttraffic–I-95 northbound pursuit of a black pick up truck, starting in Westport for burglary suspect has just got off exit 35 to add to your commuting pleasure. 1:11pm–#Bridgeport CT– A street robbery just occurred in the 500 block of Huntington Road.  Police are looking for two tall thin black males in black hoodies last seen walking towards the Dairy Queen.  A firearm was used in the robbery 12:52am–#Bridgeport CT– A driver crashes at 394 Saunders Avenue and the driver then flees.  State Police on the way with K-9. #Bridgeport, CT – Mayor Joe Ganim today issued the following statement praising the Bridgeport City Council vote to reject the last-minute pay hikes given to former Mayor Bill Finch and dozens of his political appointees on the last day of the previous administration.  (Mayor Finch received a retroactive raise of $17,079.58 retroactive issued November 30, 2015, and a complete list of the raises for political appointees is attached to the end of this release.)  The pay raises cost taxpayers nearly $2.5 Million dollars that were not budgeted for during the current fiscal year.  They were contained in the latest contract negotiated with the supervisors’ union.

“This is a very wise decision by our city councilors to reject these appalling raises that Mayor Finch succeeded in sneaking through in the last days of his administration, without the proper scrutiny.  These raises are costing taxpayers nearly $2.5 Million dollars for the current fiscal year, an expenditure no one budgeted for and that is now adding to our already staggering budget deficit.  Much of the money walked out the door along with Mayor Finch’s cronies on the last day of the previous administration because it was direct deposited into people’s bank accounts.  But we will make every effort to get those funds back.  I look forward to working with the supervisor’s union on hammering out a new contract that is more in line with the best interests of Bridgeport’s taxpayers.”

Don’t start the New Year off with a dead battery! 10:12pm–#Bridgeport CT– A man hunt in the backyards off Chospsey Hill came up empty.  Both State and Bridgeport Police were tracking a stolen red Honda CRV taken from Stamford with a report of over $9,000 in the backseat according to radio reports.  It is unknown if the car had the money still in the car.   Police with State Police K-9 tracked mainly in the Platt and May Street area but did not locate the suspects.  The vehicle was recovered.