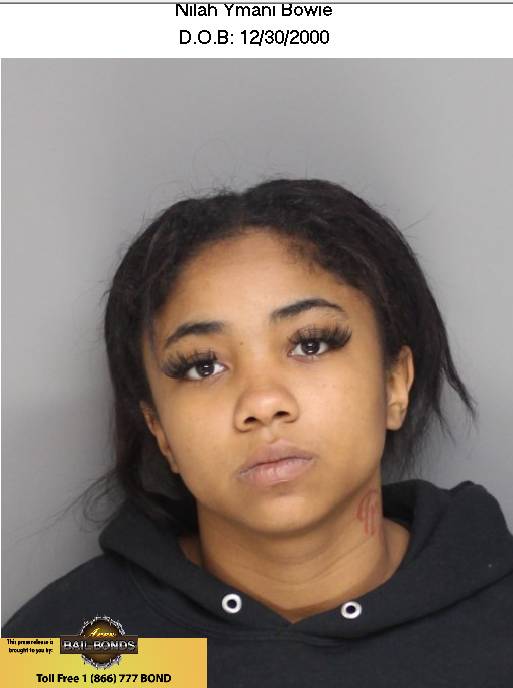 #Bridgeport Police Press Release–A 21 year-old female who fired multiple gunshots out of a window of a William St. home in June, and then barricaded herself inside, has been arrested for taking part in another shooting in Bridgeport in February of this year.

Nilah Bowie, DOB: 12/30/00, of 1872 Bathgate Ave, in the Bronx, New York. who goes by the performance name of Tiny B, was taken into custody during a court appearance in Bridgeport on Wednesday. She was charged with Conspiracy to Commit Assault in the First Degree, Risk of Injury to A Minor, Reckless Endangerment in the First Degree and Breach of Peace in the Second Degree. The charges stem from the shooting of a 22-year-old of Bridgeport man who was sitting in his car on Park St. on February 18th, 2022.  The victim’s injury was non-life threatening
Bowie’s bond was set at $500,000.

According to the investigation by the Detective Bureau, Bowie had a dispute with a juvenile female who was in the car.  She then brought the shooter back to the car. The shooter then opened fire. The male victim was shot in the leg while in the driver’s seat.
Ballistic evidence tied the gun Bowie was found with on William St. in June to the Park St. shooting in February.

The Bridgeport Police Department’s Identification Unit/Major Crimes detectives used the National Integrated Ballistics Information System (NIBIN) to connect the shootings through ballistic comparisons. The NIBIN system is run in conjunction with the United States Bureau of Alcohol Tobacco and Firearms, and Explosives.

Bowie was charged with multiple counts in the June 9th case, including Risk of Injury to a Minor, Reckless Endangerment in the First Degree, Illegal Discharge of Firearm and Interfering/Resisting. Those charges are still pending. The incident resulted in a response from the Department’s Emergency Services Unit.
The Bridgeport Police is seeking additional suspects in the February 18th shooting, and expect to make more arrests. Anyone with information is asked to call Detective Jeffrey Holtz at the below number.  All tips will be kept confidential.