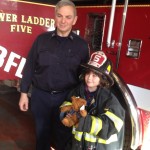 #Bridgeport, CT – Dec. 24, 2013 – Ten-year-old Vladimir Romano has a simple explanation for why he sells  lemonade and buys teddy bears to give to fire departments for children.

“I don’t want people to be more scared than I was,” he said in a visit to Bridgeport Fire Headquarters this morning.

Vladimir was 3-years-old when he spiked a 105 degree temperature and was taken to the hospital by ambulance. He was scared. He remembers a firefighter putting a stuffed bear on his chest and it made him feel better.

A couple years later, he opened his first lemonade stand and his mother, Merian Schwindeman, asked what he wanted to do with the money.

“He said, ‘I’m going to give it to the fire department so they can give teddy bears to kids.”

Vladimir raises money through lemonade and cookie stands in the summer and apple cider and doughnut stands in the fall. He and his family use the money to buy Melissa and Doug™ stuffed bears and donate them to first responders to keep in their rigs to give to children who might be as scared as he was.

“I can’t imagine a better and more thoughtful gift,” said Mayor Bill Finch. “As a City, we are deeply appreciative to Vladimir and his family.”

Melissa and Doug provide the bears at cost, and this year Vladimir will donate 25 bears to Bridgeport FD, his biggest donation yet.

Vladimir’s vision has grown. He hopes to meet First Lady Michelle Obama and ask her to promote the idea nationwide for kids to help other kids.

“I wouldn’t be surprised if that happened,” his mother said with a laugh.

Vladimir was voted “One of the 8 coolest kids in the USA” by Scholastic Magazine 2013.

Anyone wishing to donate can do so at www.theteddybearfund.org