BRIDGEPORT, CT- On July 2nd, 2019 Task Force Officers (TFO’s) apprehended Kavon Roberts of 519 Brooks Street, Bridgeport. Roberts known to the Task Force, was arrested with a firearm approximately a year ago.  Roberts and his associates had reportedly taken over a corner on the East Side at East Main Street and Arctic Street which includes the G&M Deli and Grocery. Task Force Officers working with the community and outside Law Enforcement received information that this area has become a safety issue and quality of life problem with drug dealing and parties carrying firearms. With this information Task Force Officers opened an investigation.

On July 2nd, 2019 at 1530 hours Kavon Roberts, DOB 8/30/1999 was observed by TFO’s carrying a firearm in his pocket. With the assistance of K-9 Officer Martocchio, Task Force Officers apprehended Roberts in the Deli. Roberts had on his person a 380 caliber semi-auto firearm with extended magazine loaded with 10 live rounds. In addition to the illegal firearm, Roberts also had in his possession 34 small bags of Crack-Cocaine.

Kavon Roberts was arrested without incident, all evidence was processed through Bridgeport PD. Roberts is a convicted felon and is on the Deadly Weapons Registry. He was charged with Criminal Possession of a Firearm plus Ammunition, Possession of Narcotics With intent To Sell, Carrying a Pistol without Permit and Illegal Sale, Delivery or Transfer of a Firearm. Bond was set at $250,000. 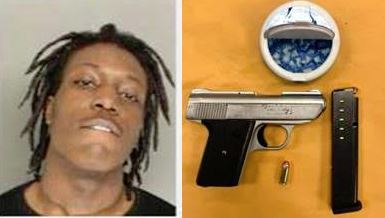