On 09/12/2019, Detectives from the Stratford Narcotics Vice and Intel Unit were conducting targeted patrol in the area of Success Ave. This area has seen an increase in crime to include: street robberies as well as narcotics sales and a recent homicide. At approx. 1300 hrs, Detectives observed a vehicle which had dark tinted windows and a canceled registration. The car was stopped and the driver was identified as 29-year-old Mark Peeples of Bridgeport.

Detectives immediately detected an odor of marijuana emanating from the vehicle. During the stop Detectives located a stolen 9mm Firearm loaded with (6) rounds of ammunition under the driver’s seat. Also located in the vehicle was a box containing approx. 100 additional rounds of ammunition. Peeples was placed under arrest and transported to headquarters. Peeples is a CONVICTED FELON for previous weapons related crimes and is prohibited from carrying or possessing a firearm. Peeples was charged with: 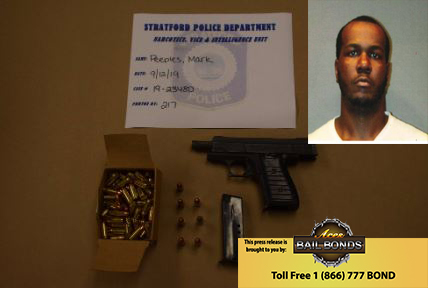