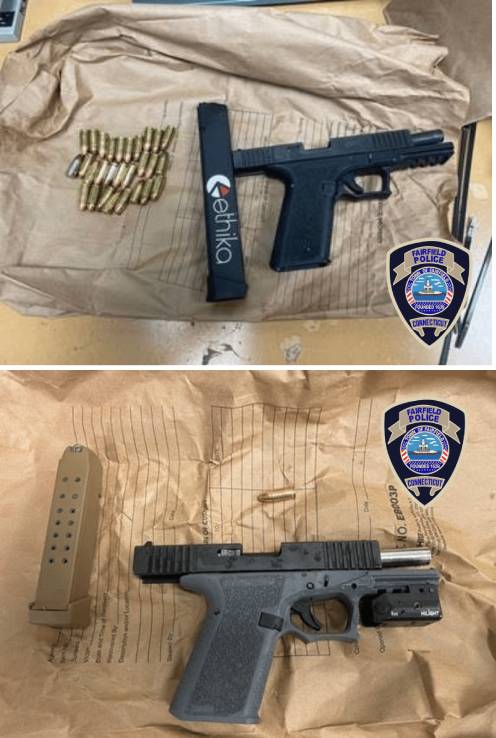 Chief Robert Kalamaras reports that the Fairfield Police Department arrested two teenagers on several charges and seized two “ghost guns” following a lengthy pursuit of an alleged stolen motor vehicle last night.
A JUVENILE MALE, AGE 15, OF MERIDEN, was arrested and charged with:
Larceny in the First DegreeIllegal Transfer of a Stolen Pistol or RevolverCarrying a Pistol Without a Permit Illegal Possession of a Weapon in a Motor VehiclePossession with Intent to Distribute more than an Ounce of Heroin or MethamphetaminesCriminal Possession of a FirearmResisting ArrestA JUVENILE MALE, AGE 17, OF HAMDEN, was arrested and charged with:
Larceny in the First DegreePossession with Intent to Distribute more than an Ounce of Heroin or MethamphetaminesIllegal Transfer/Purchase of a Stolen Pistol or RevolverCarrying a Pistol Without a Permit Illegal Possession of a Weapon in a Motor VehicleCriminal Possession of a FirearmCriminal Possession of a High Capacity MagazineEngaging Police in a PursuitReckless DrivingResisting ArrestThe JUVENILES were transported to the Bridgeport Juvenile Detention Center pending their arraignments at Bridgeport Superior Court. Both JUVENILES also had Felony Take Into Custody orders issued by the Connecticut Superior Court following numerous allegations of violent crimes, and after they allegedly escaped from juvenile detention. Their identities will not be released due to their age.
At approximately 5:25 p.m. on Thursday, June 2, a Fairfield Police Officer was conducting patrol in an unmarked Fairfield Police vehicle when they observed a black Honda Civic traveling south on Black Rock Turnpike. They conducted a query of the vehicle’s registration and discovered that the vehicle had recently been reported stolen out of New Haven following a reported violent carjacking.
Another officer, in a marked Fairfield Police vehicle, responded to the area and activated his emergency lights to initiate a traffic stop at the intersection of Black Rock Turnpike and Rakoczy Avenue.
The driver allegedly refused to stop and fled from officers on Black Rock Turnpike. Fairfield Police deployed spike strips further down the road in the area of Castle Avenue in an attempt to stop the suspect vehicle. The vehicle ran over the spike strips, puncturing three of the vehicle’s four tires. The vehicle then began driving in the wrong direction on the Kings Highway East Traffic Circle before subsequently entering the on-ramp for I-95, traveling northbound.
Fairfield Police, with the assistance of Connecticut State Police, pursued the vehicle on I-95 North before the vehicle exited in Bridgeport on Seaview Avenue. Bridgeport Police also assisted in the pursuit. The pursuit remained at a low rate of speed due to the vehicle’s punctured tires.
Police then deployed spike strips on Seaview Avenue, which the vehicle drove over before once again entering the on-ramp onto I-95, traveling northbound. At this time, the driver lost control of the vehicle in the grass median. The pursuit lasted approximately five miles.
The driver, later identified as the 17-YEAR-OLD JUVENILE, and a passenger, later identified as the 15-YEAR-OLD JUVENILE, allegedly exited the vehicle and ran across the lanes of traffic.
After a brief foot pursuit, officers located the two juvenile suspects and placed them under arrest without further incident. No injuries were reported.
Upon a search of the vehicle, officers located and seized two 9mm semi-automatic handguns along with a high capacity (30 round) magazine. The guns did not have a serial number and are believed to be what is referred to as “ghost guns.” A ghost gun is a firearm where parts of a gun are purchased separately and assembled together. But once completed, the firearm needs to be registered and have a serial number stamped on it in order for it to be possessed legally.
Police also seized three bags containing a white, loose rock-like substance that is believed to be crack cocaine and 35 individually packaged white wax folds containing a white powdery substance believed to be heroin.
“I would like to commend all Fairfield Police Officers involved and thank the Connecticut State Police and Bridgeport Police for their assistance in apprehending these two suspects, resulting in the seizure of dangerous weapons and substances,” Chief Kalamaras said. “Due to the diligent work of all officers involved, we were able to successfully apprehend the suspects without further harm to the community.”