2:47pm–#Bridgeport CT– The bank clock in the background timestamps the beginning of demolition of the former AGI Rubber Company located at 141 Stratford Avenue.  Yesterday there was another spectacular fire that has plagued the buildings over the years.    The city submitted an emergency demolition order today and Stamford Wrecking will be doing the demolition.  Workers said they are aware of PCBs on the site and will be shipping the debris to a “hot location” for dumping.  The materials will be treated later.  The workers were unaware of any work previously.  The city in May 2015 received a $200,000 grant from the EPA for PCB and building removal.  City spokesperson Rowena White says she is unaware of any work on the site regarding this grant. 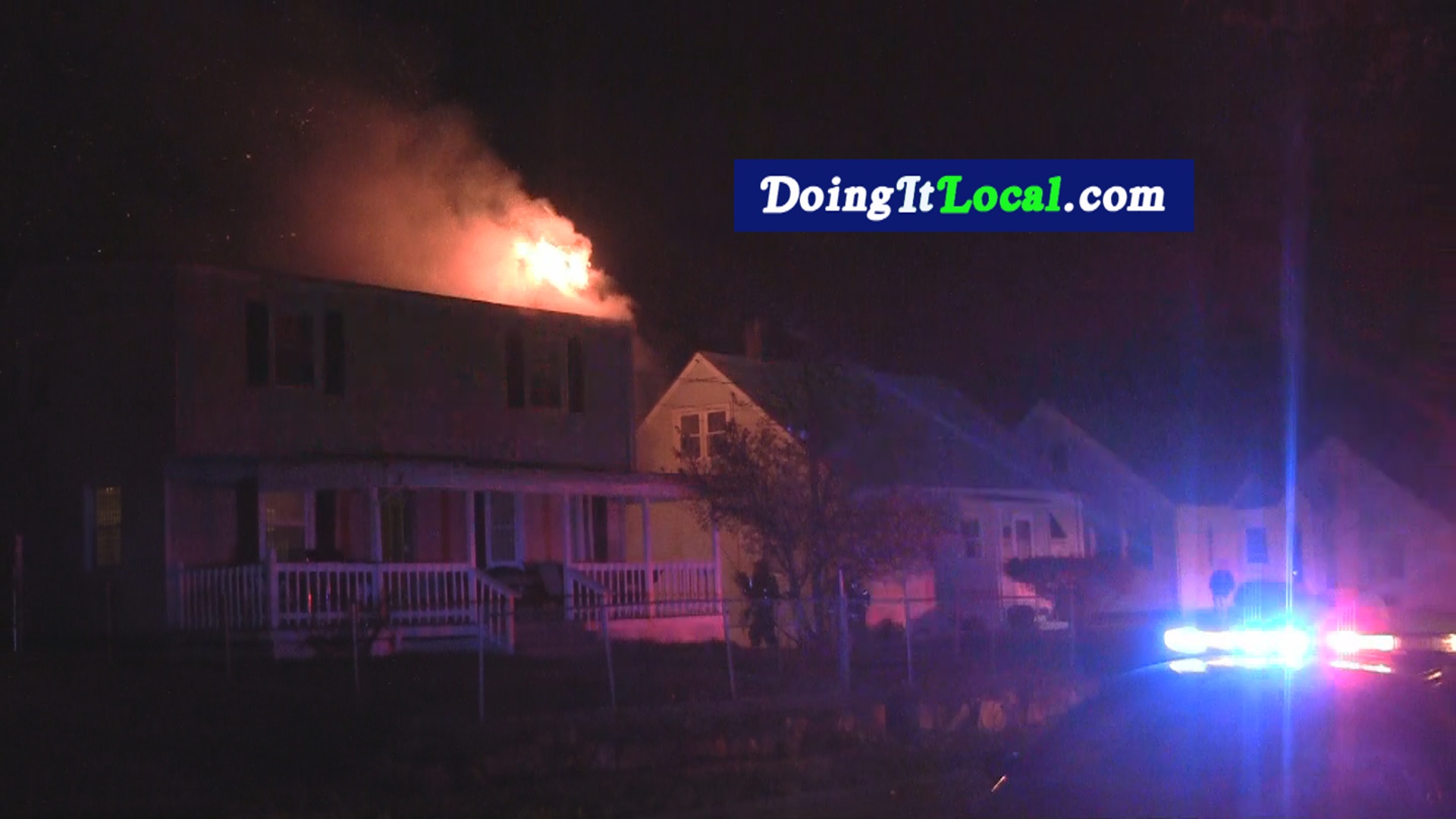 9:04pm–#Bridgeport CT– Just as I was leaving the brush fire on Valley Road in Fairfield a call for a house fire on Queen Street a half a mile a way came in.  I know the firefighters are quick but I couldn’t believe how quickly they had the bulk of this fire knocked down.  Multiple calls said there was flames shooting out of the chimney.  When I arrived the fire had already spread to the roof and the side of the house.  Everyone made it out safely and a police sergeant was consoling them.  Within minutes of the first fire truck the bulk of the fire was out and the began the important work of checking for extensions and making sure all the embers of anything burned were completely  extinguished. 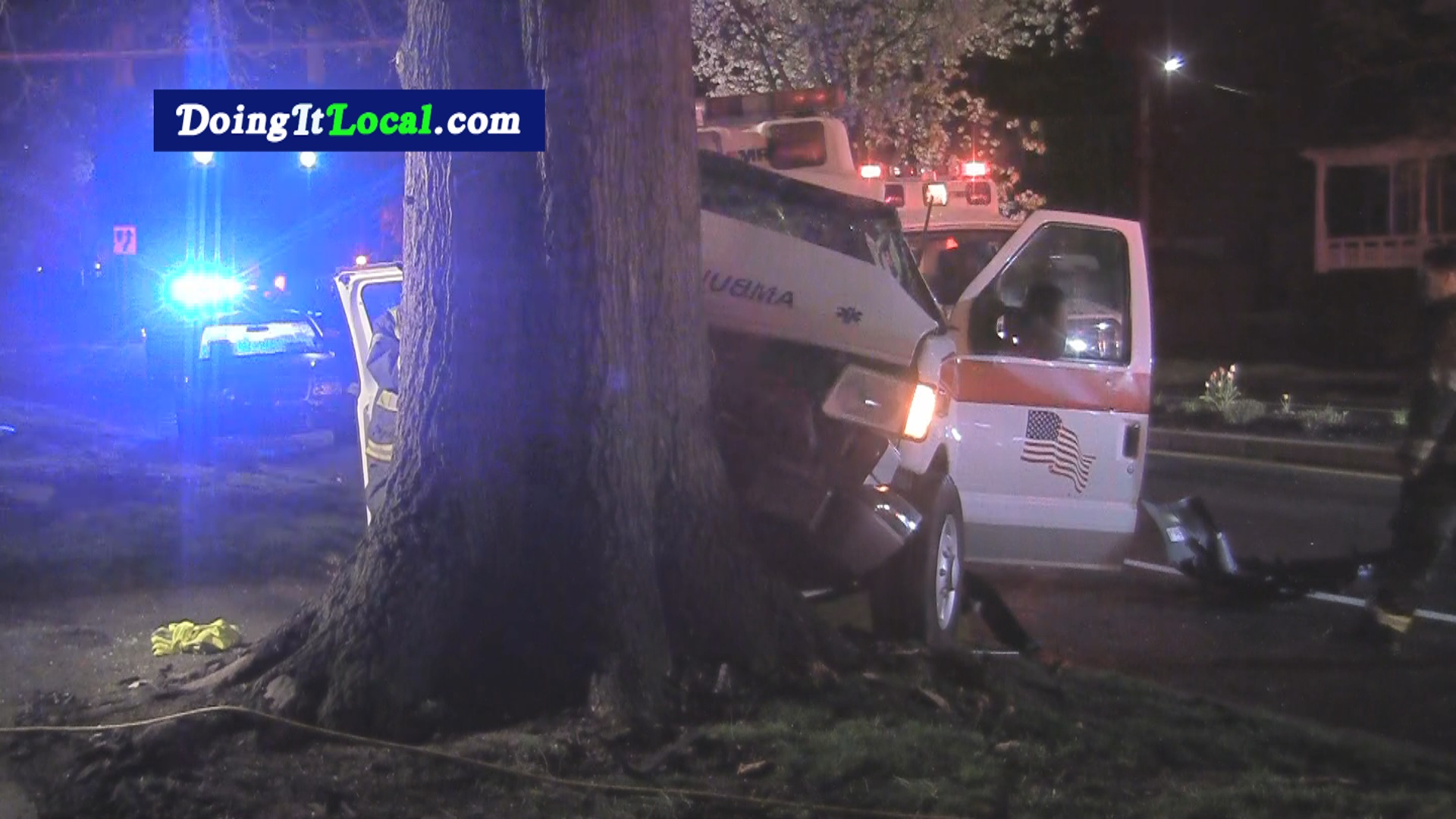 2:25am–#Bridgeport CT– Witnesses said a car ran the red light at North and Wood Avenue forcing an AMR ambulance off the road.  The ambulance hit a parked car and then a tree head on.  An AMR medical student was pinned in the passenger seat and it took firefighters over a half hour to free her.  After sorting through all the debris police located the front bumper of the responsible vehicle with its license plate still attached.  Police told me the went to the address the car was registered to.  They found two men in the backyard on Everett Street in Bridgeport.  They admitted to being in the accident.  The driver told police he was afraid because he did not have a drivers license.  The car was registered to the driver’s mother and the car is insured.  AMR officials told me the medical student pinned has leg injuries.  He also said the ambulance was not carrying any patients at the time of the crash.

3:11pm–#Bridgeport CT– A woman was stabbed in her apartment at PT Barnum Housing in building 21 on the second floor. The woman who assaulted her jumped from the 2nd story balcony and may have broken her leg. She may have been transported to the hospital in a private vehicle. The victim was talking with first responders and her injuries are not thought to be life threatening.

11:04pm–#Bridgeport CT– A car lost control and hit a porch at the corner of French and Hudson Street.  There were no injuries. 11:09am–#Bridgeport Connecticut– Witnesses told me a woman on a scooter was cut off by a car and she lost control hitting a utility pole at the intersection of Clinton and Fairfield Avenue.  The woman had her helmet on and did not lose consciousness but she did break her right arm and possibly has a shoulder injury. 11:40pm–#Bridgeport Connecticut– Firefighters are on scene of a fire at 690 Arctic Street in the basement laundry room.

This news report is made possible by: http://www.servprostamford.com/ UPDATE: From the Fairfield Police:

This was a one vehicle (motorcycle) type collision that occurred on Brooklawn Ave., just north of its intersection with Algonquin Rd. The collision investigation revealed that Vehicle #1 was traveling southbound on Brooklawn Ave., when he lost control of his motorcycle and crashed in the roadway. Operator #1 originally left the scene of accident.

Upon further investigation, we learned that he was currently at St. Vincent’s Hospital. Op #1 explained while traveling southbound on Brooklawn Ave., he lost control of the bike and was unable to stop appropriately so he “dumped” the bike. Operator #1 was driven to St. Vincent’s Hospital by his girlfriend, Vanessa Hinojosa after he sustained injuries. he was issued a Misdemeanor Summons for 14-215 Operating a Motor Vehicle Under Suspension and 14-40a(a) Operating a Motorcycle without an endorsement. A warning was given for evading.

11:10pm–#Bridgeport CT–#Fairfield CT–A report of a motorcyclist being hit by a car at 435/436 Brooklawn Avenue near Aldine Avenue.  Bridgeport Firefighters were first on scene first reporting a motorcycle down but no rider.  Then the reported an altercation between the motorcyclist and driver of the car.  Then additional radio reports then said the person was walking away towards North Avenue.  Then it was reported that the accident was in Fairfield so Fairfield Police took over.  The driver of the motorcycle was reportedly picked up by a car to be driven to the hospital.  Confused?  Me too. I’ll get a follow up from Fairfield’s Public Affairs Officer Lieutenant Robert Kalamaras in the morning.

This news report is made possible by:http://www.zeislaw.com/attorneys/james-r-miron/ 5:47pm–#Bridgeport CT– Shots fired between two vehicles near Orchard and Boston Avenue.  No one or anything reported hit. 11:40pm–#Bridgeport CT– Police received multiple calls for shots fired on Evers Street.  Police are on scene reporting that so far on one or anything hit.