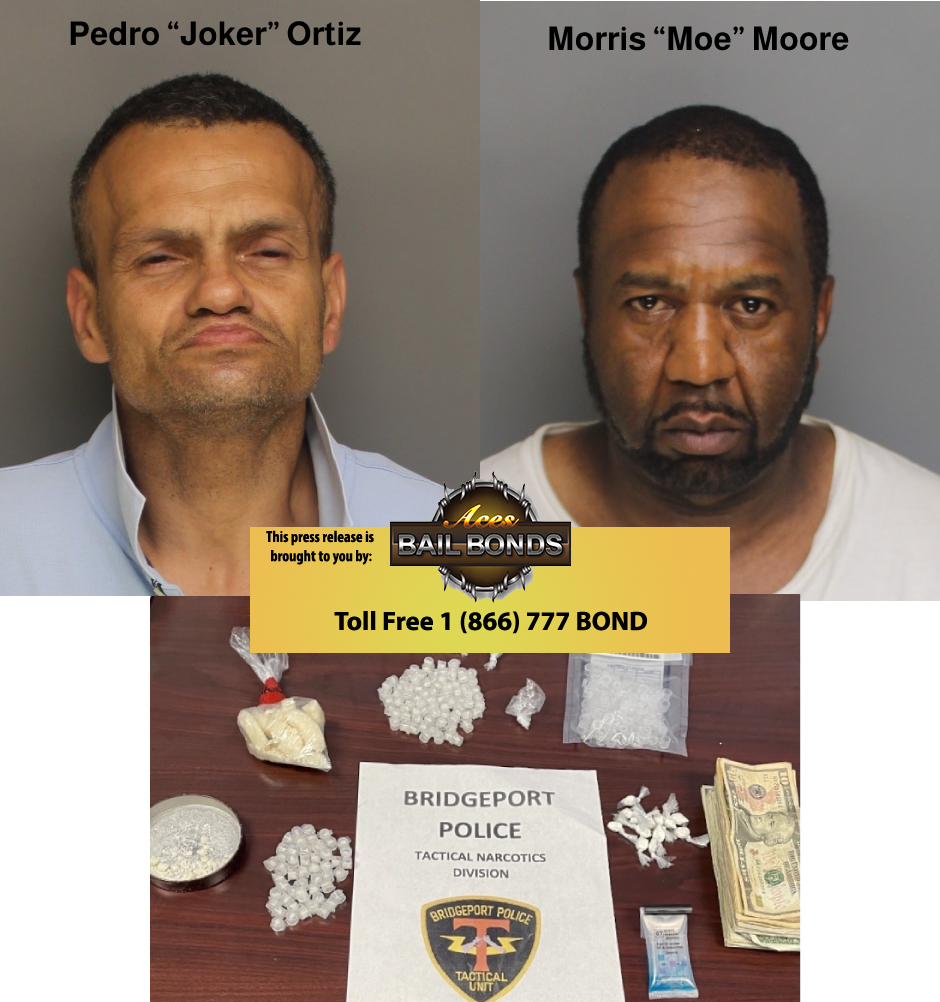 During the months of May and June 2022 the Bridgeport Police Department Narcotics and Vice Division received information that a narcotics dealer referred to as “Joker” was selling crack cocaine out of a residence within the 700 block of Hallett Street.

As a result of that investigation the identity of the crack dealer was determined to be 52-year-old Pedro “Joker” Ortiz of Bridgeport, Connecticut.  Narcotics and Vice Detectives further learned that Joker had an associate that would resupply his Hallett Street operation.  A search and seizure warrant was secured for Joker and his residence.

On July 1, 2022 Pedro “Joker” Ortiz was stopped outside of his residence while the search and seizure warrants were performed.  Narcotics were found on Joker’s person and he was immediately placed under arrest.

Upon the execution of the Hallett Street search warrant, Narcotics Officers were meet with interference by a male occupant identified as 50-year-old Morris “Moe” Moore of Bridgeport, Connecticut.  Moore opened the door and then immediately closed it on the Officers attempting to perform the requirements of the search warrant.  Officers were able to gain entry by pushing the door open before Moore could lock it.  Moore was placed under arrest for interfering with the lawful execution of a search and seizure warrant.  During a search of Moore’s person, incident to arrest, he was found to be in possession of a large quantity of crack cocaine.

During the search of the Hallett Street residence Officers located a total of 157.2 grams of crack cocaine, 4.8 grams of powdered cocaine, a small amount of fentanyl, and ammunition.

Both Moore and Ortiz are convicted felons and prohibited from possessing firearms or ammunition.

Morris “Moe” Moore is charged with Operation of a Drug Factory, Possession of Narcotics with Intent to Sell, Criminal Possession of Ammunition, and Interfering with a Search Warrant.  Bond is set at $150,000.00.  Moore was release after making his bond.  He is scheduled to appear in court on July 14, 2022.

Pedro “Joker” Ortiz is charged with Operation of a Drug Factory, Possession of Narcotics with Intent to Sell, and Criminal Possession of Ammunition.  Bond is set at $125,000.00 and he is scheduled to appear in court on July 5, 2022.